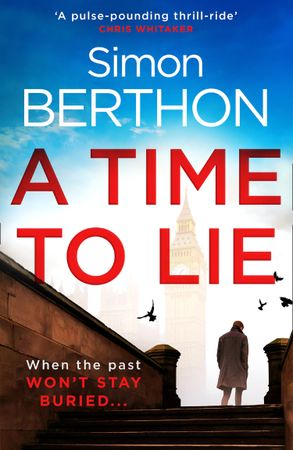 A Time To Lie

A smart, fast-paced espionage thriller for fans of Frank Gardner and Mick Herron.

When the past won't stay buried…

On the morning of the autumn 2020 Tory Party conference, the skeleton of a young woman's hand is discovered in London.

Prime Minister Robin Sandford is cornered by Jed Fowkes, Special Adviser at the Treasury, and confronted with a terrible accusation. It concerns a young woman, who went missing from their flat years ago – and whose dismembered remains now appear to be resurfacing.

With his career on the brink of ruin, Sandford has no choice but to enlist the unofficial help of MI5 and the only man he believes he can trust, Joe Quine. A decision which will lead the Prime Minister into a shadowy world of espionage, illegal trafficking and murder.

As more human remains are discovered, long-buried secrets and a suspicious death in high places threaten not only Sandford but the security of the state itself.

Simon Berthon has won awards for his work on World in Action for which he was deputy editor. He has produced documentaries for Secret History and Dispatches.

Other Works by Simon Berthon

A Secret Worth Killing For

A Time To Lie by Simon Berthon