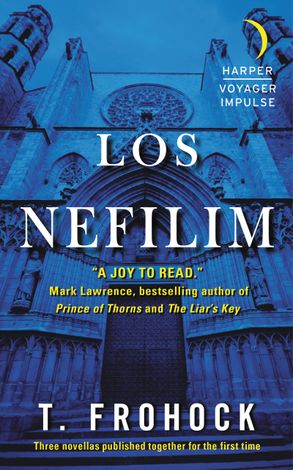 Collected together for the first time, T. Frohock’s three novellas--In Midnight’s Silence, Without Light or Guide, and The Second Death--brings to life the world of Los Nefilim, Spanish Nephilim that possess the power to harness music and light in the supernatural war between the angels and daimons. In 1931, Los Nefilim’s existence is shaken by the preternatural forces commanding them … and a half-breed caught in-between.

Diago Alvarez, a singular being of daimonic and angelic descent, is pulled into the ranks of Los Nefilim in order to protect his newly-found son. As an angelic war brews in the numinous realms, and Spain marches closer to civil war, the destiny of two worlds hangs on Diago’s actions. Yet it is the combined fates of his lover, Miquel, and his young son, Rafael, that weighs most heavily on his soul.

Lyrical and magical, Los Nefilim explores whether moving towards the light is necessarily the right move, and what it means to live amongst the shadows.

T. Frohock has turned her love of dark fantasy and horror into tales of deliciously creepy fiction. She currently lives in North Carolina where she has long been accused of telling stories, which is a southern colloquialism for lying. Check out more of her works and news at www.tfrohock.com.

Other Works by T Frohock

Carved from Stone and Dream