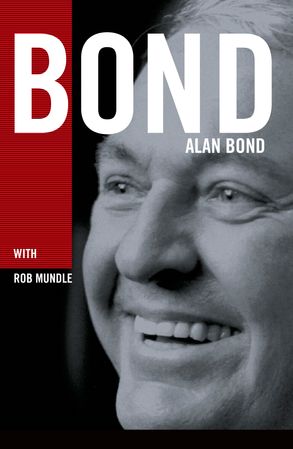 Every Australian has formed their own opinion of Alan Bond, the high-flyer who stayed to face the music. Bond, the autobiography, is his chance to tell it how it really was.

In Alan Bond's long-awaited autobiography, Bond, written with bestselling author Rob Mundle, the famous Australian answers his critics and reflects on his mistakes as well as the outside influences that were working to bring him down. He deals with family tragedies, including the death of his daughter Susanne, and gives his own engaging account of how he went from working-class signwriter to national hero to jail inmate. There are the first tentative forays into property development in the Perth suburbs while his family lived in a garage; the America's Cup win that stopped the nation; his part in the creation of the Australian icon, the Boxing Kangaroo; his bankruptcy, trials, and his imprisonment for over three-and-a-half years, as well as the subsequent rebuilding of his life. Along the way Alan Bond provides a telling snapshot of how business was done in the 1980s; of how the normal caution of banks and corporate leaders was tossed aside at the first smell of success and profits. Bond tackles the myths and rumours that have developed around this former Australian of the Year. He concedes he has made mistakes personally and professionally. Here he talks about where he went wrong and why he fell so far.