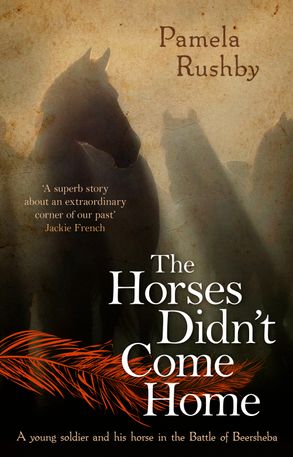 A story about a boy, a horse and the last great cavalry charge in history.

In an army camp in a Middle Eastern desert, a young Australian soldier named Harry is saddling and grooming his horse, Bunty. She is sturdy and strong; an Australian waler who belongs to Harry's sister, Laura, back home in Australia.

As Harry finishes the grooming he stands in front of Bunty. The two of them, horse and master, stand totally still. Then Harry swings up into the saddle and turns away from the camp into the desert. A few soldiers watch them as they ride out. No one says a word.

It's their last ride together.

The last great cavalry charge in history took place at Beersheba in the Sinai Desert in 1917. It was Australian soldiers and horses that took part in, and won, this amazing, unexpected, unorthodox victory.

The men proudly claimed it was their great-hearted horses that won the day.

But in the end, the horses didn't come home ...

Pamela Rushby is a well- known, award-winning Australian author. Her YA title When the Hipchicks Went to War won the Ethel Turner Prize in the 2010 NSW Premier’s Awards. HCPA published Circles of Stone in 2003 and The Horses Didn’t Come Home in 2012. Pam lives in Brisbane.

Other Works by Pamela Rushby