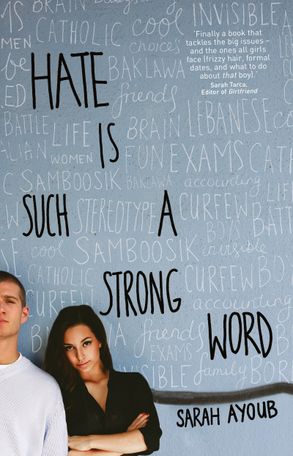 Hate is Such a Strong Word...

'Finally a book that tackles the big issues - and the ones all girls face (frizzy hair, formal dates, and what to do about that boy).'
- Sarah Tarca, Editor of Girlfriend

Seventeen-year-old Sophie hates Monday mornings, socks worn with sandals, and having to strategise like she's a battle sergeant every time she asks her parents if she can go out. But she especially hates being stereotyped because she's Lebanese.

When New Guy, Shehadie Goldsmith, is alienated at her Lebanese school because his dad's Australian, she hates the way it makes her feel.

Like she could make a difference if she stopped pretending she's invisible.

But hate is such a strong word... Can Sophie find the strength to speak out - even if it means going against everything she's been brought up to believe?

A brilliant debut novel about identity, love, culture and finding your place.

Sarah Ayoub is a freelance journalist based in Sydney, Australia. Her work has appeared in various print and online publications, including Marie-Claire, Madison, Cosmopolitan, House & Garden, Sunday Style, The Guardian, Cleo, Shop Til You Drop, Frankie, Yen, Girlfriend and more. She has taught Journalism at the University of Notre Dame and spoken at numerous industry events with the Emerging Writers' Festival, NSW Writers' Centre, the Walkley Foundation, Vibewire and more.She is the author of Hate Is Such a Strong Word and The Yearbook Committee and regularly runs writing workshops at Sydney high schools.

Other Works by Sarah Ayoub

Hate is Such a Strong Word... by Sarah Ayoub