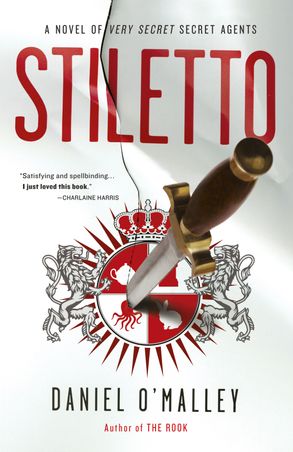 From Daniel O'Malley, acclaimed author of The Rook, comes the 'satisfying and spellbinding' (Charlaine Harris) sequel, which debuted at no.1 on US Bookscan's fantasy chart. Rook Myfanwy Thomas returns to clinch an alliance between deadly rivals and avert epic - and slimy - supernatural war.

After years of enmity and bloodshed, two secret organisations with otherworldly abilities must merge, and there is only one person with the fearsome powers - and bureaucratic finesse - to get the job done.

But as bizarre attacks sweep London, threatening to sabotage negotiations, old hatreds flare. Only Myfanwy and two women who detest each other can seek out the culprits before they trigger a devastating otherworldly war.

'I just loved this book. If you think Daniel O'Malley couldn't top The Rook, you were wrong. Stiletto is as satisfying and spellbinding as his first book ...' - Charlaine Harris, author of True Blood

PRAISE FOR THE ROOK

The Rook was published in 2012 to wide international acclaim. It was one of Time magazine's books of the year, and authors from Lev Grossman ('outrageously good') to Charlaine Harris ('I love this book!') lined up to sing its praises. In 2012 it won Best Science Fiction Novel at the 2012 Aurealis Awards, and in 2015 it reached the eighth most borrowed adult-fiction title position in Australian libraries. It is to be made into a TV series by Twilight author Stephenie Meyer and Lionsgate.

Daniel O'Malley is a 30ish American who grew up in Australia, attended college in the US, and returned to live in Australia as an adult. He now works for the Australian Transport Safety Bureau in Canberra, writing press releases for government investigations of plane crashes and runaway boats. The juxtaposition of high drama and Office-like bureaucracy at his job gave him the spark of inspiration for The Rook and subsequent Checquy novels. Visit his website at www.rookfiles.com

Other Works by Daniel O'Malley