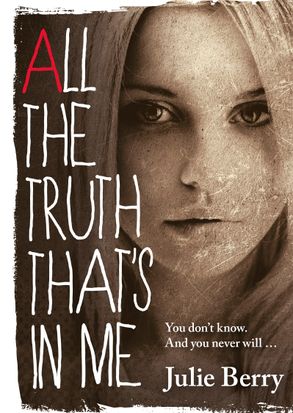 All the Truth That's in Me

Reminiscent of THE CRUCIBLE and THE SCARLET LETTER, this startlingly brilliant book draws you into the claustrophic world that Judith occupies, where those in a small community are quick to judge - and usually wrongly.

Four years ago, Judith and her best friend disappeared from their small town of Roswell Station. two years later, only Judith returned, permanently mutilated, reviled and ignored by her friends and family. Unable to speak, Judith lives like a ghost in her own home, silently pouring out her thoughts to her childhood friend, Lucas. He is the boy who has owned her heart for as long as she can remember - even if he doesn't know it. But when Roswell Station is attacked, long-buried secrets come to light, and Judith is forced to choose - to continue living in silence, or recover her voice, even if it means changing her world, and the lives around her, forever. told in a voice that is achingly raw and intimate, this remarkably original novel will haunt and stay with you. It will fill you with Judith's passion and longing, and its mysteries will keep you feverishly turning the pages until the very last one. Ages: 12+ 'Every now and then, a novel comes along with such an original voice that readers slow down to savor the poetic prose. this is such a story. A tale of uncommon elegance, power and originality.' KIRKUS StARRED REVIEW

Julie Berry grew up on a farm in western New York as the youngest of a family of seven book-loving kids. She now lives in eastern Massachusetts with her husband, four young sons, and two cats. She is the author of six critically acclaimed books for young readers. All the Truth That’s in Me is her first novel for teens and adults. Visit her at julieberrybooks.com

Other Works by Julie Berry

All the Truth That's in Me by Julie Berry