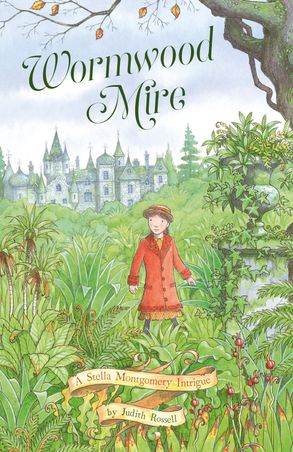 THE MUCH-AWAITED SEQUEL TO THE RUNAWAY BESTSELLER WITHERING-BY-SEA

'you won't be disappointed. Wormwood Mire is another page-turner.'
- Kids' Book Review

When Stella Montgomery returned to the Hotel Majestic cold and wet but exhilarated by adventure, the Aunts were furious.

Now they are sending Stella away to the old family home at Wormwood Mire, where she must live with two strange cousins and their governess.

But within the overgrown grounds of the mouldering house, dark secrets slither and skulk, and soon Stella must be brave once more if she's to find out who - or what - she really is ...

From bestselling writer-illustrator Judith Rossell comes the thrilling and magical sequel to her multi-award-winning novel, Withering-by-Sea.

'Those who loved Withering-by-Sea ... will be thrilled to hear that Wormwood Mire is even better!' - Readings

'will keep the reader turning the pages in anticiption' - Story Mama

Judith Rossell is the multi-award-winning author-illustrator of the bestselling Stella Montgomery series (Withering-by-Sea, Wormwood Mire, Wakestone Hall and A Garden of Lilies: Improving Tales for Young Minds). Before beginning her career in children's books, Judith worked as a government scientist (not a mad scientist, a normal kind of scientist) and also for a cotton-spinning company (that made threads for T-shirts and denim jeans and mops and teabag strings). Judith has written thirteen books and illustrated more than eighty. Her work has been published in the US and UK, and translated into more than twenty languages. Judith lives in Melbourne, Australia with a cat the size of a walrus. www.judithrossell.com

Other Works by Judith Rossell