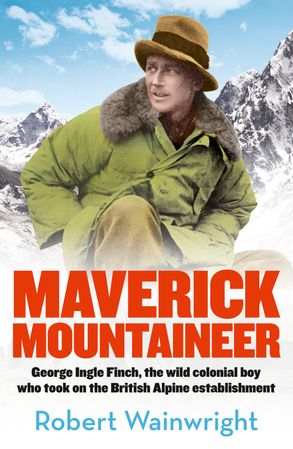 George Ingle Finch, mountaineer, soldier, scientist, rebellious spirit, boy from the bush, was in his day one of the most famous men in the world. In 1922 he stood at the highest point on Everest, a feat not bettered for 30 years. He invented the predecessor to the puffer jacket and pioneered the use of oxygen in climbing. A World War I hero whose skills also helped save London from burning to the ground during the Blitz of World War II, he was a renowned scientist who was personally chosen by Nehru, the first Indian prime minister, to help lead his nation into the modern world.

With a private life torn by war and misguided by social norms, a reputation as an outsider among the British alpine climbing establishment, and some rough and ready 'colonial' habits, Finch was a brilliantly colourful character - so why has he vanished from the pages of history? In this first full-length biography, Robert Wainwright surveys the man who is now best known as the father of Academy award-winning actor Peter Finch - but who was so much more.

Robert Wainwright is a well-known journalist and the author of several topical books. Fascinated by characters and what drives them, he has written books about Rose Porteous, Caroline Byrne, Martin Bryant, Sheila Chisholm, George Ingle Finch and Ian Thorpe. The author of the bestselling Sheila: the Australian beauty who bewitched British society, he lives in London with his wife, Paola Totaro, and their family.

Other Works by Robert Wainwright

Miss Muriel Matters: The Australian actress who became one of London's most famous suffragists