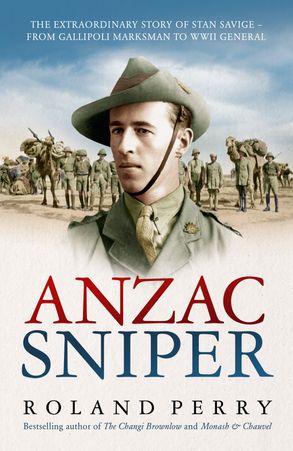 Anzac Sniper: The extraordinary story of Stan Savige, one of Australia'sgreatest soldiers

'Stan Savige had been on Gallipoli for just two weeks, in the trenches firing at Turks less than 20 metres away. But Sniper's Ridge was a different proposition. Killing took on another dimension. In the flurry of trench warfare, a soldier would rarely be certain he had hit an enemy. On this ridge of death, however, Savige's job was to make sure he struck as many of the opposition as possible.'

The son of a country butcher, Stan Savige left school at twelve to become a blacksmith's striker. But in 1915, a passage in the bible inspired the devout scout leader and Sunday school teacher to enlist. Soon his abilities as a crack marksman attracted the attention of the officers and he was put in charge of Sniper's Ridge, his job to eliminate the enemy assassins in Anzac Cove. Savige succeeded and survived Gallipoli, only to be sent to the Western Front then Iran as part of the crack squad Dunsterforce. It was the beginning of a long, dangerous and distinguished military career spanning both world wars, with Savige commanding and fighting in Europe, Iran, North Africa, the Middle East and the Pacific in World War II, initially as Major-General then Lieutenant General.

In this gripping biography, Roland Perry paints a fascinating and complex portrait of Lieutenant General Sir Stanley George Savige, KBE, CB, DSO, MC, ED, a man of character and compassion, a quiet outsider who founded the war veterans' support charity Legacy, who still has few peers in courage, skill and achievement and whose record is second to none in Australian military history, in the scope of his combat over two world wars.

ROLAND PERRY OAM is one of Australia's most prolific and versatile authors. He has published 34 books: from biographies to books on politics, espionage, military history, royalty and sport, and including five novels. His sports books include biographies of Sir Donald Bradman, Steve Waugh, Keith Miller and Shane Warne. His awards include the Fellowship of Australian Writers National Literary Award for non-fiction in 2004 for Monash: The Outsider Who Won a War, and Cricket Biography of the Year in 2006 from the UK Cricket Society for Miller's Luck: The Life and Loves of Keith Miller, Australia's Greatest All-rounder. In 2011 Roland Perry was awarded the Medal of the Order of Australia, for services to literature, and was made a Fellow of Monash University. In 2012 he became Monash University's first Writer-in-Residence, lecturing PhD students on writing and Australian history. In 2016 ABC Books published Celeste, the biography of the courtesan, countess and author Celeste de Chabrillan, and in 2018 ANZAC Sniper, the biography of Lieutenant General Sir Stanley Savige. Tea and Scotch with Bradman is his 34th book.  For more about Roland Perry, see the author's website: www.rolandperry.com.au

Other Works by Roland Perry

Tea and Scotch with Bradman

Celeste: The Parisian Courtesan Who Became a Countess and Bestselling Writer

Anzac Sniper: The extraordinary story of Stan Savige, one of Australia'sgreatest soldiers by Roland Perry