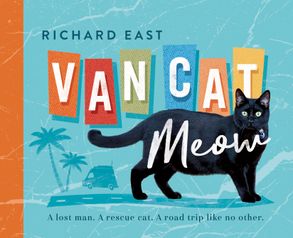 Van Cat Meow: A Lost Man, A Rescue Cat, A Road Trip like No Other

A lost man. A rescued cat. A road trip like no other. People everywhere have fallen in love with Willow, the van cat, as she explores the wilds of Australia with Richard, her devoted owner. Now for the first time, Richard and Willow tell the true story behind the images that have captured our hearts ...

Richard East once lived in a suburban house in Hobart, Tasmania, with a career and a mortgage completing the picture. But despite the certainty in his life, he felt lost. Realising he was at a crossroads, Richard was faced with a decision: follow the herd or pursue his own path?

The rest, as they say, is history. Selling his house and throwing in his career, Richard took to the road in a big white van. His sole companion? Willow, the small black rescue cat he'd promised never to leave behind.

Now Richard and Willow travel Australia in their 'kittied'-out home on wheels. While Richard may appear to be in charge, Willow has her own lessons to share, of appreciating the little things and living in the moment, whether it's lingering to enjoy a desert sunset or taking an unmapped track into the forest on a whim.

Full of adorable photos featuring one little black adventure cat, Van Cat Meow tells the charming and inspiring story of the trip of a lifetime that became a whole new way of life.

Tasmanian Richard East was an IT professional with a promising career. He now calls the road his home and has been travelling full-time with his cat in their campervan abode since May 2015. He shares his adventures and stories through his social media channels which have more than 100,000 followers.

Van Cat Meow: A Lost Man, A Rescue Cat, A Road Trip like No Other by Richard East