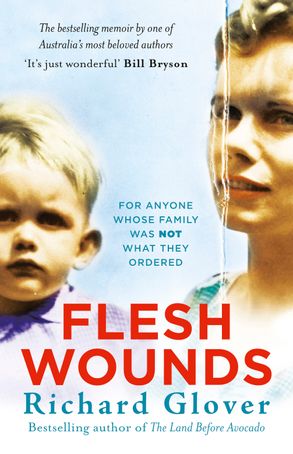 A deluded mother who invented her past, an alcoholic father who couldn't deal with the present, a son who wondered if this could really be his family.

Richard Glover's favourite dinner party game is called 'Who's Got the Weirdest Parents?'. It's a game he always thinks he'll win. There was his mother, a deluded snob, who made up large swathes of her past and who ran away with Richard's English teacher, a Tolkien devotee, nudist and stuffed-toy collector. There was his father, a distant alcoholic, who ran through a gamut of wives, yachts and failed dreams. And there was Richard himself, a confused teenager, vulnerable to strange men, trying to find a family he could belong to. As he eventually accepted, the only way to make sense of the present was to go back to the past - but beware of what you might find there. Truth can leave wounds - even if they are only flesh wounds.

Part poignant family memoir, part hopeful search for the truth, this is a book for anyone who's wondered if their family is the oddest one on the planet. The answer: 'No'. There is always something stranger out there.

'Both poignant and wildly entertaining' - Sydney Morning Herald
'A new classic ... a breathtaking accomplishment in style and empathy' - The Australian

'Heartbreaking and hilarious ... I couldn't put it down' - Sun Herald

'Not since Unreliable Memoirs by Clive James has there been a funnier, more poignant portrait of an Australian childhood.' - Australian Financial Review

Richard Glover has written a number of bestselling books, including Flesh Wounds and The Mud House. He writes regularly for the Sydney Morning Herald and The Washington Post, as well as presenting the comedy program Thank God It's Friday on ABC Local Radio. To find out more, visit www.richardglover.com.au

Other Works by Richard Glover

The Land Before Avocado

The Mud House: How Four Friends Built a Place in the Australian Bush