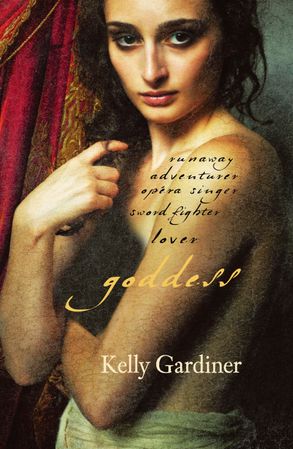 A sparkling, witty and compelling novel based on the tragic rise and fall of the beautiful seventeenth century swordswoman and opera singer, Julie d'Aubigny (also known as La Maupin), a woman whose story is too remarkable to be true - and yet it is.

Versailles, 1686: Julie d'Aubigny, a striking young girl taught to fence and fight in the court of the Sun King, is taken as mistress by the King's Master of Horse. tempestuous, swashbuckling and volatile, within two years she has run away with her fencing master, fallen in love with a nun and is hiding from the authorities, sentenced to be burnt at the stake. Within another year, she has become a beloved star at the famed Paris Opera. Her lovers include some of Europe's most powerful men and France's most beautiful women. Yet Julie is destined to die alone in a convent at the age of 33. Based on an extraordinary true story, this is an original, dazzling and witty novel - a compelling portrait of an unforgettable woman.

'I thought the book was utterly fascinating, dazzlingly original and inventive, and written with such wit and flair. the character of Julie is drawn so poignantly - what a woman!' Kate Forsyth

'The divine creature who plummets 'from the painted clouds' to center stage in Kelly Gardiner's gender-bending picaresque Goddess, is based on an actual historical character, Julie d'Aubigny. Scenes sparkle with period details and sensory impressions: all spectacle and shimmer, all gesture and pose, Baroque mask and mirror and role-play. Gardiner does this very well. And her goddess fascinates.' New York Times Book Review

'This is a wonderful story, made all the more gripping for being founded on truth. Gardiner undertakes to bring this ambiguous and outrageous woman back to life ... she succeeds with flair ... I wholeheartedly recommend this book as the most exquisitely-rendered historical novel I have read in years.' Historical Novel Society review

Kelly Gardiner is a writer and editor who has worked on websites, newspapers and magazines. She is currently the editor of New Zealand Lifestyle Block magazine, and is also a travel writer and photographer. Born in Melbourne, Kelly now lives with her partner on an island in New Zealand’s Hauraki Gulf.

Other Works by Kelly Gardiner