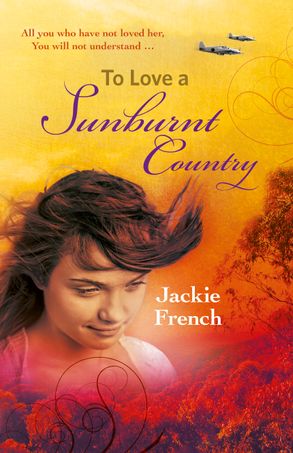 To Love a Sunburnt Country

In war-torn Malaya, Nancy dreams of Australia - and a young man called Michael.

The year is 1942 and the world is at war. Nancy Clancy left school at fourteen to spend a year droving, just like her grandfather Clancy of the Overflow. Now sixteen, Nancy's family has sent her to Malaya to bring home her sister-in-law Moira and baby nephew Gavin. Yet despite the threat of Japanese invasion, Moira resists, wanting to stay near her husband Ben.

But not even Nancy of the Overflow can stop the fall of Singapore and the capture of so many Australian troops. When their ship is bombed, Nancy, Moira and Gavin are reported missing.

Back home at Gibbers Creek, Michael refuses to believe the girl he loves has died. As Darwin, Broome and even Sydney are bombed, Australians must fight to save their country. But as Michael and the families of Gibbers Creek discover, there are many ways to love your country, and many ways to fight for it.

From one of Australia's most-admired storytellers comes a gripping and unforgettable novel based on true events and little-known people. This is a story about ultimate survival and the deepest kinds of love.

'A book about a love of country that is heartwarming and heartbreaking, and hard to put down.'

To Love a Sunburnt Country by Jackie French