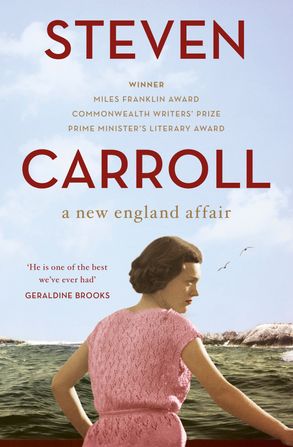 The latest, immensely moving novel of lost love and missed moments from Steven Carroll, one of Australia's greatest writers, multi-award winner of the Miles Franklin Award, the Commonwealth Writers Prize and the Prime Minister's Literary Award

‘Why do some nights feel as though they were always waiting to happen? Or have already happened and will again? And why don't we know it then? Why is it only afterwards we say, yes, that was when my life turned?'

1965. The great poet, TS Eliot, is dead. Hearing the news, the seventy-two year old Emily Hale points her Ford Roadster towards the port of Gloucester, where a fishing boat will take her out to sea, near the low, treacherous rocks called the Dry Salvages, just off Cape Ann, Massachusetts. Over the course of that day, clutching a satchel of letters, Emily Hale slips between past and present, reliving her life with Eliot - starting with that night in 1913, the moment when her life turned, when the young Tom Eliot and Emily Hale fell deeply in love with each other. But Tom moved to London to fulfil his destiny as the famous poet ‘TS Eliot', and Emily went on to become his muse - the silent figure behind some of the greatest poetry of the 20th century - his friend and his confidante. But never did she become his lover or his wife.

From Steven Carroll, one of our most brilliant, award-winning authors, A New England Affair is the third novel in his acclaimed Eliot Quartet, a companion novel to The Lost Life and A World of Other People. It is a deeply moving, intense and poignant novel of a love that never finds the right moment, and so becomes the ghost of what could have been, of what never quite was, and never quite will be.

'The most intimate of portraits ... there is a lot of Mr Eliot and Mr James in Mr Carroll - by which I mean high praise indeed.' Sydney Morning Herald

'A stark and simple portrait of yearning.' The Saturday Paper

'In his fiction, Steven Carroll stretches and slows time ... [and] a distinctive rhythm results... Mostly, though, Carroll's approach to fiction succeeds even when it seemingly shouldn't. If it's a mystery - a minor miracle, even - that the various techniques he employs come together to create stylised and yet fresh prose, then that mystery itself becomes part of the pleasure of reading a Carroll novel.' Australian Book Review

'As always with Carroll, it is not so much the plot or the characters, well-drawn as they are, but the richness of ideas, the allusive, measured prose, the subtle cross references to other books and literary theories that captivate the reader.' Adelaide Advertiser

Other Works by Steven Carroll

The Year of the Beast