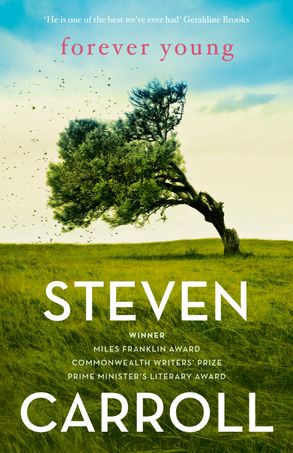 Forever Young is set against the tumultuous period of change and uncertainty that was Australia in 1977. Whitlam is about to lose the federal election, and things will never be the same again. the times they are a'changing. Radicals have become conservatives, idealism is giving way to realism, relationships are falling apart, and Michael is finally coming to accept that he will never be a rock and roll musician.

A subtle and graceful exploration of the passage of time and our yearning for the seeming simplicities of the past, Forever Young is a powerfully moving work - clear. beautiful, affecting - by one of our greatest authors.

'No Australian author has better evoked the sense of change, the ravages of time, the obligation to self as well as to others ... At every turn this exquisitely crafted novel can widen our notion of what it is to be human, then, now and, possibly, later.' The Sydney Morning Herald

'Carroll's prose is languid, focusing on the inner world of his characters and the minutiae and movements of nature and time. There is plenty going on with the story, but it's not the plot that enchants here, it's the prose.' Daily Telegraph

Other Works by Steven Carroll

The Year of the Beast