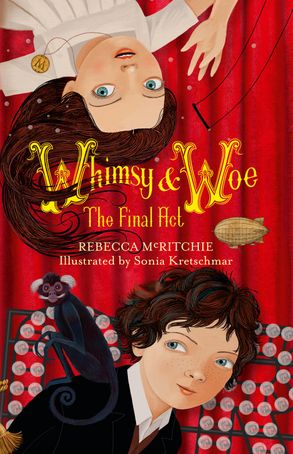 'Adventurous and outlandish, Whimsy and Woe will hook kids in from the first page.'

- Books+Publishing on Whimsy and Woe

As a blazing inferno rages through Whitby City, Whimsy and Woe Mordaunt see their last clue go up in flames and their journey to find their parents has seemingly come to a fiery end. That is until the siblings spot a very familiar man in the crowd . .

In the final act to this dramatic tale, Whimsy and Woe must escape villainous thieves, travel beneath a desert, climb the Mountainous Mountains and perform a death-defying trapeze act in the Benton Brothers Circus . . . all before going undercover at the annual Thespian Society Masquerade Ball.

PRAISE FOR WHIMSY AND WOE

'Whimsy and Woe has it all: incredibly courageous children (hooray!), an evil calculating aunt, the ignominious Ignatius Solt (boo!) and a despicable one-legged pirate (hiss!), captivity and misery in a boarding house populated by an outlandish clientele (gasp!) and a heroic escape from a treacherous storm, imprisonment in a swamp and a wolf with razor-sharp teeth ... all told with vivid thespian style and flair.' - Readings

'Rebecca McRitchie knows what young readers want. McRitchie delivers a fun, energetic read in her debut children's fiction title; it is perfect for fans of Judith Rossell's Withering-by-Sea and Lemony Snicket's 'A Series of Unfortunate Events'. With non-stop plot twists, Whimsy and Woe has the ability to keep the attention of reluctant readers who will want to know what happens next.' - Books+Publishing, four stars

'Written in a style wonderfully akin to Lemony Snicket, the quaint language and eccentric characters will capture your imagination and keep you up reading late into the night.' - Goodreads review

Rebecca McRitchie would love to tell you that she was raised by wolves in the depths of a snow-laden forest until she stumbled upon and saved a village from the fiery peril of a disgruntled dragon. But, truthfully, she works as a children's editor and lives in Sydney. Whimsy and Woe and the sequel, Whimsy and Woe: The Final Act, are her first fiction titles.

Other Works by Rebecca McRitchie

Sonia Kretschmar is an award-winning illustrator and artist who also lectures in Communication Design at Billy Blue College of Design in Melbourne.As well as illustrating, Sonia has also worked for many magazines, including Rolling Stone, been a finalist in the 2011 Archibald Prize and created stamps for Australia Post. Sonia combines a variety of traditional and digital techniques in her work, which she also occasionally animates.

Other Works by Sonia Kretschmar