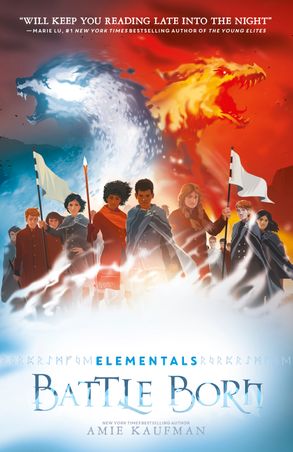 Though Anders and his friends have delayed an all-out war between the ice wolves and scorch dragons, their mission is far from over. With adults on both sides trying to track them down, they've sought refuge in Cloudhaven, a forbidden stronghold created by the first dragonsmiths. The ancient text covering Cloudhaven's walls could be the key to saving their home if only the young elementals could decipher it.

To make matters worse, the city of Holbard is in ruins and its citizens are reeling. Food is running short. Many have been forced into bleak camps outside the city, causing friction between the humans and wolves who once protected them.

To rebuild Vallen, Anders, Rayna and all their allies must find a way to unite humans, ice wolves and scorch dragons, before they lose their last chance.

New York Times bestselling author Amie Kaufman delivers the thrilling second installment in this epic middle-grade fantasy series about a world where powerful magical shapeshifters are locked in a conflict that has spanned generations.

'I found a satisfying fantasy world like none I have read before - one in which dragons and wolves take human form and have magical powers.

One of the strengths of this book is the exploration of the idea that truth is a matter of perspective - that there are two (or more) sides to every story. There is no clear enemy, the conflict arises from the tension between the dragons and the wolves, and the reader can empathise with both sides, even though many of the adults in the story cannot ... This is a great book for middle-grade readers 8-12.' - Reading Time

'Engaging to the end' - Books+Publishing

'you'll wind up on the edge of your seat, unable to put it down' - New York Times bestseller Meagan Spooner

Amie Kaufman is a New York Times and internationally bestselling author of young adult fiction, including the Elementals series, Unearthed, and the Starbound trilogy, coauthored with Meagan Spooner; and the Illuminae Files trilogy, coauthored with Jay Kristoff. Her multi-award-winning work has been described as "a game-changer" (Shelf Awareness) and "out-of-this-world awesome" (Kirkus Reviews). Raised in Australia and Ireland, Amie has degrees in history, literature, law, and conflict resolution. She took howling lessons from a wolf expert while preparing to write this book. She lives in Melbourne with her husband, their rescue dog, and an extremely large personal library. Read more at www.amiekaufman.com.

Other Works by Amie Kaufman