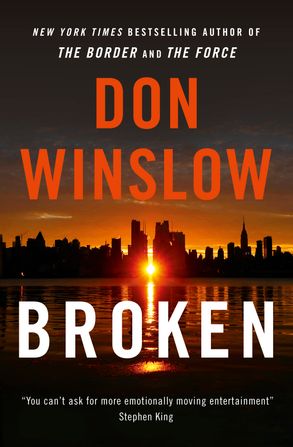 A riveting collection of six short novels from the New York Times bestselling author of The Force and The Border.

'Is there any doubt that Don Winslow is the greatest?' New York Times

In six intense novellas connected by the themes of crime, corruption, vengeance, justice, loss, betrayal, guilt and redemption, Broken is #1 international bestseller Don Winslow at his nerve-shattering, heart-stopping, heartbreaking best. In Broken, he creates a world of high-level thieves and low-life crooks, obsessed cops struggling with life on and off the job, private detectives, dope dealers, bounty hunters and fugitives, the lost souls driving without headlights through the dark night on the American criminal highway.

With his trademark blend of insight, humanity, humor, action and the highest level of literary craftsmanship, Winslow delivers a collection of tales that will become classics of crime fiction.

'One of the best in the field ... a writer for whom nuance and multiple levels are articles of faith' Independent

'You should try to get your hands on everything Winslow's written, because he's one of the best thriller writers on the planet' Esquire

Don Winslow is the author of twenty-one acclaimed, award-winning international bestsellers, including the New York Times bestseller and sensation The Force, the #1 international bestseller The Cartel, The Power of the Dog, Savages, and The Winter of Frankie Machine. Savages was made into a major film by three-time Oscar-winning writer-director Oliver Stone. The Power of the Dog, The Cartel and The Border sold to FX in a major multi-million-dollar deal to air as a weekly TV series beginning in 2020. A former investigator, anti-terrorist trainer and trial consultant, Winslow lives in California and Rhode Island.

Other Works by Don Winslow