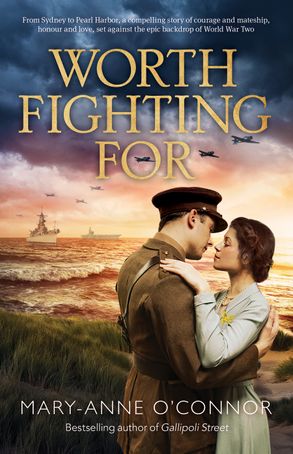 From Darwin to Pearl Harbor, Sydney to New Guinea, a compelling story of courage, honour and a great love set against the epic backdrop of the Second World War.

Eighteen–year–old Junie Wallace is a smart girl and, with her two brothers away at war and her third brother just killed in action, she knows there is only one way to save the family farm for her grieving parents. Unfortunately, that solution involves marrying the unscrupulous Ernest, and breaking the heart of the young drover she loves, Michael.

But the war is looming ever closer, and when Pearl Harbor brings the threat of Japanese aggression to Australian shores, the fates of many become inextricably interwoven.

From the explosive battles of the Pacific campaign to the desperate fighting in the New Guinea rainforest; the dancehall gaiety of Sydney's Trocadero to the terror of the Darwin bombings, this epic family saga brings home the importance of mateship and fighting for what you believe in, even when impossible odds seem stacked against you, even when all seems lost…

Worth Fighting For is a resounding testament to the enduring force of love: a reminder of what can be achieved if you draw on your reserves of courage and listen to the truth in your heart.

'Wins over the reader with the clarity of her characters and a strong plot.' Daily Telegraph

Bestselling author Mary-Anne O'Connor has a combined arts education degree with specialties in environment, music and literature. After a successful marketing career she now focuses on writing fiction and non-fiction as well as public speaking. Mary-Anne lives in a house overlooking her beloved bushland in northern Sydney with her husband Anthony, their two sons Jimmy and Jack, and their very spoilt dog Saxon. Her previous novels are Gallipoli Street (2015), Worth Fighting For (2016), War Flower (2017) and In a Great Southern Land (2019).

Other Works by Mary-Anne O'Connor

In a Great Southern Land

Worth Fighting For by Mary-Anne O'Connor