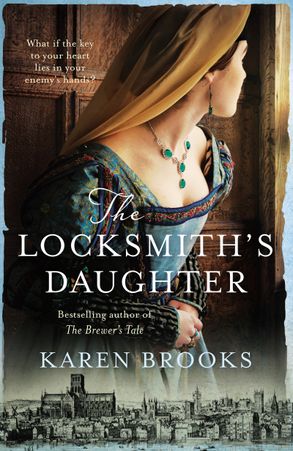 A powerful and dramatic story of spies, secrets and one man's quest to save Elizabethan England.

What if the key to your heart lies in your enemy's hands?

In a world where no one can be trusted and secrets are currency, one woman stands without fear.

Mallory Bright is the only daughter of London's master locksmith. For her there is no lock too elaborate, no secret too well kept. Sir Francis Walsingham, spymaster and protector of Queen Elizabeth – the last of the Tudor monarchs – and her realm, is quick to realise Mallory's talent and draws her into his world of intrigue, danger and deception. With her by his side, no scheme in England or abroad is safe from discovery; no plot secure.

But Mallory's loyalty wavers when she witnesses the execution of three Jesuit priests, a punishment that doesn't fit their crime. When Mallory discovers the identity of a Catholic spy and a conspiracy that threatens the kingdom, she has to make a choice – between her country and her heart.

Mallory, however, carries her own dark secrets and is about to learn those being kept from her – secrets that could destroy those she loves.

Once Sir Francis's greatest asset, Mallory is fast becoming his worst threat … and everyone knows there's only one way Sir Francis deals with those.

Karen Brooks is the author of thirteen books, an academic of more than twenty years' experience, a newspaper columnist and social commentator, and has appeared regularly on national TV and radio. Before turning to academia, she was an army officer for five years, and prior to that dabbled in acting. She lives in Hobart, Tasmania, in a beautiful stone house with its own marvellous history. When she's not writing, she's helping her husband Stephen in his brewery, Captain Bligh's Ale and Cider, or cooking for family and friends, travelling, cuddling and walking her dogs, stroking her cats, or curled up with a great book and dreaming of more stories.

Other Works by Karen Brooks

The Locksmith's Daughter by Karen Brooks