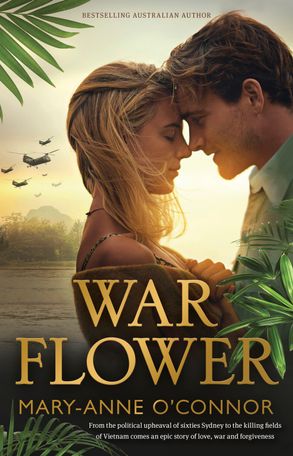 Set against the colourful backdrop of a swinging sixties Sydney and the brutality of the Vietnam War, War Flower follows the journey of six young people through their lives in a turbulent era, and asks - can love still prevail when horror becomes almost too much to bear?

Can love prevail, when horror becomes too much to bear?

The 1960s are beating a fresh pulse of political and cultural upheaval through Sydney. For sheltered convent schoolgirl Poppy Flannery such changes seem irrelevant. But it doesn't stop her from longing to join in, especially if it means spending time with the popular boy she secretly loves, Ben Williamson. So when the opportunity for a dream escape to Surfers Paradise arrives, Poppy and her twin sister Rosemary seize it and find themselves in the midst of the swinging sixties at last.

Rosemary embraces their secret new life with a vengeance, discovering drugs, boys and radical politics in a haze of parties, music festivals and protest marches. But such freedom is stolen when Rosemary's great love, Angus, is sent to Vietnam, along with Ben.

Soon a war fought thousands of kilometres away will arrive on the twins' door in the form of orphaned refugee Thuy. As many more victims begin to appear, including shattered versions of Australian soldiers, they must decide how far they will go for the men they adore, and ask themselves whether love really is all you need.

Bestselling author Mary-Anne O'Connor has a combined arts education degree with specialties in environment, music and literature. After a successful marketing career she now focuses on writing fiction and non-fiction as well as public speaking. Mary-Anne lives in a house overlooking her beloved bushland in northern Sydney with her husband Anthony, their two sons Jimmy and Jack, and their very spoilt dog Saxon. Her previous novels are Gallipoli Street (2015), Worth Fighting For (2016), War Flower (2017) and In a Great Southern Land (2019).

Other Works by Mary-Anne O'Connor

In a Great Southern Land