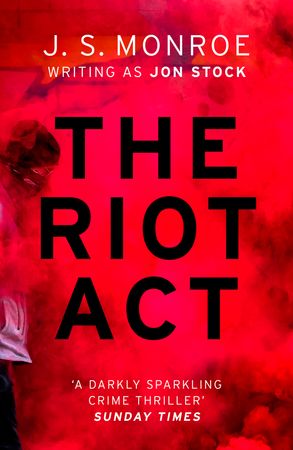 'An exciting talent' VAL MCDERMID.
The ferocious crime thriller debut from the bestselling author of FORGET MY NAME.

A man vows revenge on the terrorists who murdered his girlfriend. When he's approached by MI5 to track down the killers, he's taken deep into London's trading rooms, where mayhem reigns... An edge-of-your-seat crime thriller, from the international bestseller J.S. Monroe.

'Dutchie' is a dreadlocked street-fighting anarchist, living with his girlfriend on a houseboat in South London. When Annalese is killed in a bomb blast on Oxford Street, Dutchie vows revenge. But things take an unexpected turn when Dutchie is approached by MI5 to track down the terrorists responsible, taking Dutchie into the dealing rooms of the City, which trades in its own brand of mayhem... THE RIOT ACT is taut, dark, and impossible to put down.

'The most off-beat hero of the year is a fully-fledged street-fighting anarchist ... The book is violently politically correct and amoral, but written with real power' DAILY TELEGRAPH.

J.S. Monroe studied English Philosophy at Cambridge and has worked as an independent journalist and collaborator with Radio 4 for the BBC.  Author of five novels, he has been a correspondent in New Delhi and the editor of the weekend edition of the Daily Telegraph.

Other Works by J.S. Monroe