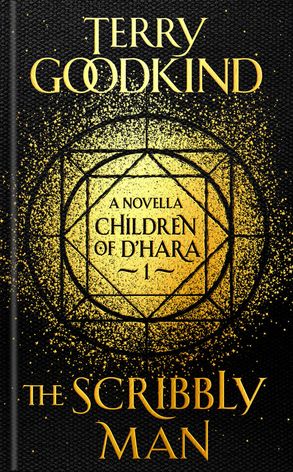 The world has been forged anew. Tyranny vanquished. It is the triumph Richard Rahl and his wife Kahlan Amnell fought so hard, over so many years, for. What Richard does not expect is a demand for his immediate, unconditional surrender.

'We have all caught fleeting glimpses of them: the monster under the bed, the dark shadow just out of sight, the knot of unexpected terror in the pit of your stomach' – Kahlan Amnell. The world has been forged anew. Tyranny vanquished, the breach between the living and the dead healed, the stars themselves realigned. It is the triumph Richard Rahl and his wife Kahlan Amnell fought so hard, over so many years, for. Ruling a vast realm encompassing lands and peoples unknown, they have vowed to bring a golden age of peace to a world shattered by terror and war. What Richard does not expect is a demand for his immediate, unconditional surrender. Not of D'Hara, but of the entire world... The Scribbly Man is the first episode in Terry Goodkind's new serial novel, The Children of D'Hara. Told in irresistibly intense instalments, this is the story of a world confronted by an apocalyptic nightmare. If you've read Terry Goodkind before, welcome back. If you haven't, there's no better place to start than here. 'I want to introduce everyone to THE CHILDREN OF D'HARA, a new series that continues the story of the lives of Richard and Kahlan. This is a journey that began 25 years ago with the 1994 release of WIZARD'S FIRST RULE, when Richard first met Kahlan that fateful day in the Hartland woods. After the Sword of Truth series ended, I knew there was more to Richard and Kahlan's story. Much more. A whole world more. For years, readers have asked me about Richard and Kahlan's lives after the Sword of Truth series... and importantly, about their children. While my masterwork, Sword of Truth, concluded with WARHEART – 20 languages and 26 million books sold – I was burning to tell readers more about Richard and Kahlan. For that reason, this new series starts immediately after the 'Sword of Truth' books ended. Without skipping a beat, readers will plunge back into Richard and Kahlan's lives, with new episodes releasing every three months. So it is that I want to welcome you all back into the Sword of Truth world with many of the characters besides Richard and Kahlan, such as the Mord-Sith, that we have come to love. Learn what the star shift has done to their world and what monsters now lurk in shadows. I promise an arresting, beautiful, and sometimes tragic adventure that will keep you glued to this irresistible story.' – Terry Goodkind .

Terry Goodkind is a #1 New York Times bestselling author. His Sword of Truth series has sold over 20 million copies. Before writing full-time, Terry worked as a wildlife artist, a cabinetmaker, a racing driver and a violin maker. He writes thrillers as well as epic fantasy and lives in the desert in Nevada.

Other Works by Terry Goodkind

The Scribbly Man by Terry Goodkind