Behind Their Finest Hour: A History of the Rugby League World Cup in 10 Matches 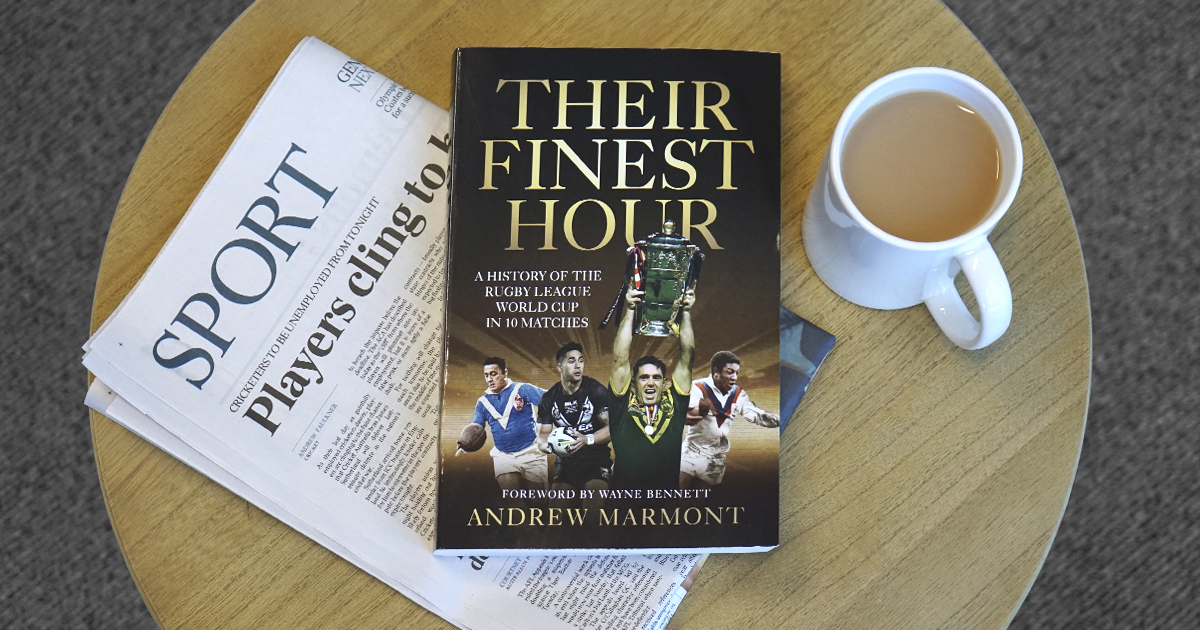 Author, freelance writer, producer, presenter and voice-over artist, Andrew Marmont, shares with us how his love of sport from a young age led him to write his debut book, Their Finest Hour.

It took two years to write my debut book Their Finest Hour. In another way, it’s a culmination of more than 20 to get to this moment.

Since the age of 10, initially using a hairbrush for my microphone, I’ve been commentating on rugby league and cricket. I used to ring up Radio Sport, giving them my opinions on the latest Black Cap selection or what the Warriors needed to do to win.

Imagine a high-pitched, awkward kid speaking on air at 9pm on a Tuesday night, and that’s what it was like. Most of my peers would be exploring the wonders of ‘blue light discos’ in their pre-pubescent and teenage years, but my love for a long time wasn’t a girl – it was sport, and in particular, sports books.

I loved reading titles like the New Zealand Cricket Almanack and Martin Crowe’s Winning Cricket, running through the statistics and soaking up stories.

As I grew older, I started taking an interest in a range of different sports. Rugby union dominates in New Zealand. But its lesser-known cousin, rugby league, captured my imagination. It was fast. The commentators loved it. I grew to love it too.

I began to write consistently. My first novel, a time-travelling epic called Treachery in Time, came in at 2,000 words. My fifth Form English teacher gave me a C-. Convoluted and needs development. No matter: I was in print. I loved the feeling. What a buzz. 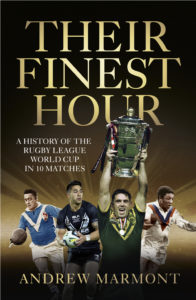 My first interview? Sir Edmund Hillary when I was 13 for a school assignment. I asked him what it was like to reach the top of Mount Everest. His answer? “I just wanted to get down!”

I moved to Australia in my early 20’s and got into rugby league.

I remember thinking how little coverage international rugby league got at the time. Helen Littleton, my future publisher at HarperCollins, took this idea and gave it a better angle: the World Cup.

Where do you start to tackle such a huge volume of material? In short: the National Library of Australia.

I travelled up to Canberra on a cool, autumn morning, and entered the towering building. I spent two weekends – from the doors opening to late afternoon – reading, researching, listening and devouring words like corn chips. I looked at old newspaper clippings, audio recordings, as well as dusty programs and volumes of Rugby League Week.

It was exhilarating. I remember thinking, ‘if I could choose to spend my time doing anything, writing an international rugby league book would be it.”

I spoke to previous players, coaches and administrators, watched DVD’s, old matches, highlights and interviews. I began to piece together a narrative and set a timeline.

The result? Something I’m very proud of. My 10-year-old self is jumping for joy inside. The 31-year-old is also.

Their Finest Hour: A History of the Rugby League World Cup in 10 Matches is available in stores and online now. 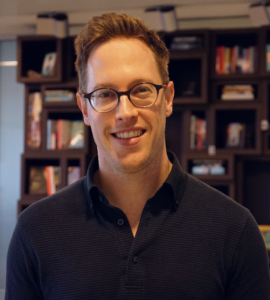 Andrew Marmont was born in Auckland, New Zealand, and fell in love with Rugby League when the Auckland Warriors joined the ARL competition in 1995. After graduating from the University of Auckland in 2007, Andrew moved to France before settling in Melbourne. A regular contributor to Big League, he also writes for Inside Sport, Rugby League World and Commentary Box Sports. Andrew has loved sport from an early age, frequently airing his views on NZ’s Radio Sport as a boy. His first interview was Sir Edmund Hillary at the age of 13.

« 9 Strategies for Managing Anxiety
HARPERCOLLINS ACQUIRES CARLY FINDLAY BOOK »
"Behind Their Finest Hour: A History of the Rugby League World Cup in 10 Matches"