A Day in the Life with Bill ‘Swampy’ Marsh 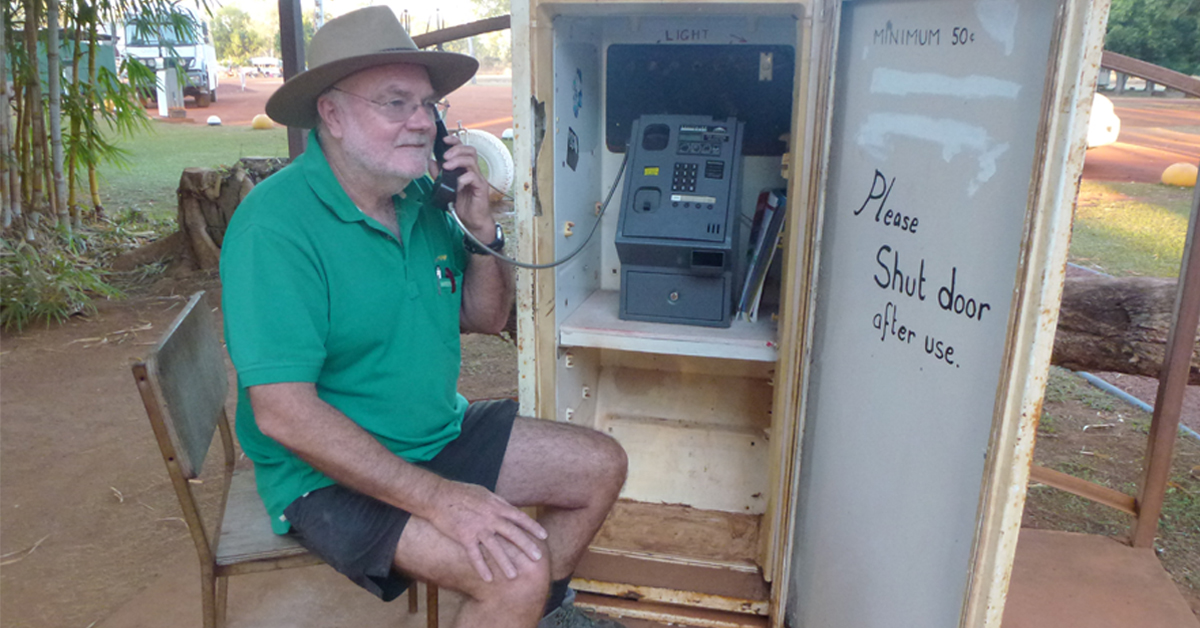 It’s a bit hard to describe a ‘typical day’ in my writing life, as the writing of my Great Australian Outback series is more a process. To make a living as a full-time writer, I have to produce a book per year. And with each book taking three years to write that takes a bit of organisation. In any one year, I’ll have one book going through the editing process for release around October, I’ll be writing a book for the following year plus I’ll be gathering contacts for the book to come out the year after.

It all begins with me and the publisher sorting out a theme. To date I’ve written seventeen books on topics such as shearing, the flying doctor service, droving, railways, CWA etc. The next book is a collection of outback nurse’s stories. Okay, so we’ve got a theme. After having been involved with the Great Australian Outback series for a number of years I first get in touch with past contacts who may have a story to tell or who are willing to hunt around and find someone who has. If I can score an interview on a national ABC radio program over the Christmas break that’s of enormous help. I usually have a short chat with the announcer and leave my contact details for listeners to get in touch. For the nurse’s stories, I also had the support of CRANAplus, an organisation that helps and supports remote and isolated health workers throughout Australia. 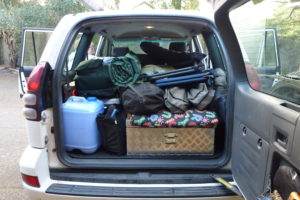 Next step is the interviewing process. As the stories cover the entirety of Australia, it’s impossible to interview everyone in person. At least half have to be done by phone. But as I prefer one-on-one interviews, I divide Australia into sections and visit as many people as I can in one year. The following year, and with a new project, I visit another section of the country. This keeps me on the road for anywhere up to three, maybe four months of the year. I travel in a four-wheel drive loaded with supplies in my fridge and esky plus I take a small two-ring burner and eating utensils etc, along with recording gear and laptop.

When I’m driving, I rarely listen to the radio or play CDs. I much prefer the silence of travelling through such a vast country … to get to know it and be absorbed by it. Within that quiet I can also mentally work on stories and, if any song lines pop into my mind I record them on my smartphone.

I record my interviews on a Zoom digital recorder then transfer them to my laptop. I type up the interviews on my laptop with the help of a transcription software program. Mind you, being the terribly slow typist I am, I do have a couple of willing transcribers and I send them the interview files over the internet.

In the early days, I used to sleep in my four-wheel-drive or pitch a tent but, with age, I now prefer to stay in a cabin in a caravan park where I can work, cook and sleep in reasonable comfort. At times my travels take me into some pretty remote places like when I was taken into the depths of Arnhem Land to interview an ex-park ranger who lived in a humpy with his Aboriginal wife. 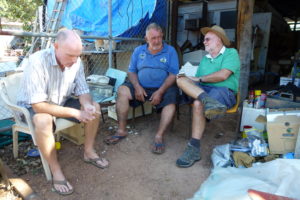 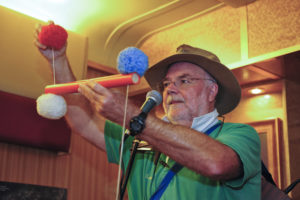 If possible, during my travels, I do performances of my stories and songs, along with the three magic tricks I’ve used for the past forty years. Sometimes six people turn up, sometimes over sixty. The performance not only gives me a chance to promote my work and sell a few books and CDs to keep the wheels moving, but it’s also an opportunity to get contacts for future projects. 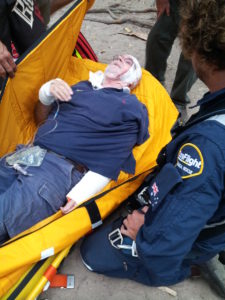 As romantic as it may seem to be able to travel through places like the Pilbara, the Kimberley, the Queensland Gulf and out in to the desert country of South Australia, Northern Territory and Western Australia, things don’t always go to plan. I’ve been lost a few times and the car’s broken down a couple of times while I’ve been out in the middle of nowhere. And while working on one particular book, I fell off a cliff in Kakadu, resulting in broken wrists and ribs, a punctured lung and a cracked skull. I couldn’t walk, so I had to be winched up into the CareFlight helicopter and flown to emergency in Darwin Hospital.

When I return from my travels, that’s when the writing part of the process starts. I begin with the completely transcribed interview, including my questions and any of the person’s speech habits. I go through that to get a ‘feel’ for the ‘voice’ of the interviewee then I dismantle the interview and rewrite it within the short story structure. I find that the first person narration – as if spoken – comes across in a more ‘personal’ manner than does the broader third person style.

I work most days and have a strict daily routine. Repetition is important as multi-tasking upsets my writing rhythm. I wake at around 5.30 – 6 am, listen to the radio while I have a cup of tea in bed. This is my ‘business meeting’, where I mentally plan the day ahead. That done I have breakfast, do my shopping, check the mail, emails, Facebook etc, then get started by 9 am.

Quiet is essential. I always have a piece of classical-relaxation music on in the background. For the past ten years it’s been Arvo Part’s Alina & Spiegel im Spiegel for violin and piano. As writing like a meditation for me, this type of music is important for a couple of reasons: a) it helps put me in a relaxed mood for writing – I find it hard to write if I’m feeling pressured or anxious – and b) if I get interrupted, when I come back to writing, the music slots me straight back into the mood, pace and rhythm of the story. 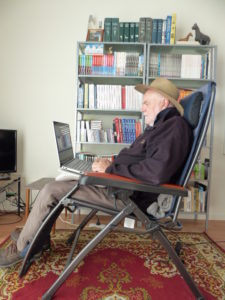 Because writing is a sedentary occupation, and because I had a near fatal heart attack when I was forty-four, I try to fit in daily exercise. Monday, Wednesday and Friday I go to the gym at 2.30 and do an hour and a half’s cardio. Then it’s a short cool-down swim followed by a sauna. Tuesdays and Thursdays I swim three-quarters of a kilometre followed by a sauna. I enjoy cooking, so at night I reward my working day with a meal I’d pre-planned during my morning ‘business meeting’ plus a couple of glasses of wine (maybe three). Before taking up writing I was in the wine industry where drinking was more of an occupation than an accompaniment to a meal. Old habits die hard.

I try not to work at night because once my brain gets fired up it’s hard to stop it so, after dinner it’s time to relax. Usually there’s so much crap on television that I go to bed at around 9.30 and read. Until recently it’s mainly been short story collections but for some strange reason I’ve now turned to murder-mysteries. In fact I’m writing one in my spare time. To help me go to sleep I play a CD – just the once – of Arvo Part’s Alina & Spiegel im Spiegel. Then it’s goodnight until I wake at around 5.30 – 6 am and the days begins again.

For each project I interview up to eighty people of which sixty or so stories will end up in the book. When I’ve got a person’s story to a point where I feel it has some solid direction, I send them a draft. If they want any changes that’s done. Before the stories are sent to the publisher I would’ve revisited them a hundred times at least. People don’t believe me … but it’s true. Like some writers, I never set myself the goal of scribing so many words per day. That doesn’t work for me because, in an attempt to get the flow and rhythm just right, sometimes I can spend a whole day working on just a few passages. The stories then go through eight months of editing, where they go between the editor and myself four or five times before we get to the proof pages. During this time I’ll be travelling, interviewing people and writing their stories, getting contacts for future projects and recording the audio version of the book. 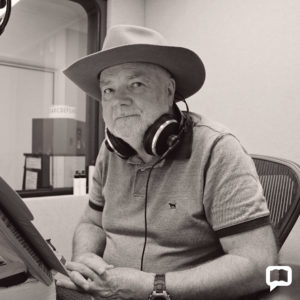 As you may have gathered, writing is my passion, as is music. Music is a huge part of my life. If I hit a dull spot in story writing, I usually fiddle around with my guitar, writing songs. Not once have I ever had the thought that I’m writing for money. That doesn’t work. I don’t know if it’s a form of madness or if it’s hidden in my DNA somewhere but, back when I was receiving rejection after rejection after rejection, I’d go to bed swearing that, That’s it – the end! Then in the middle of the night I’d be awoken by a flash of inspiration. I’ve always got a pencil and some paper handy so I’d write it down immediately and by morning, any though of quitting would be lost within the enthusiasm of a new story.

In conclusion, if I have any advice for someone who is truly passionate about writing it’d be: ‘Success is never final. Failure is never fatal. It’s courage that counts.’

We hope you’ve enjoyed getting to know our much-loved author, Bill ‘Swampy’ Marsh! His latest book, Great Australian Outback Nurses Stories, will be available in store and online from August 21, 2017. 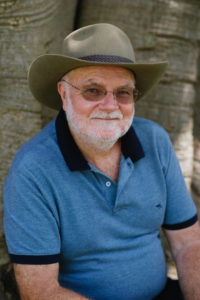 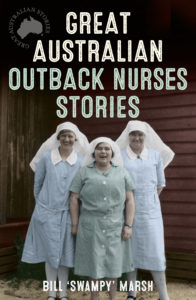 « August Book Club Reads
So you think you’re a World Cup expert? »
"A Day in the Life with Bill ‘Swampy’ Marsh"