‘The author brings his usual brilliant descriptive skills to the action, mixing individual anecdotes with big-picture considerations … A definitive history, gripping from start to finish but relentlessly disturbing.’  Starred Kirkus 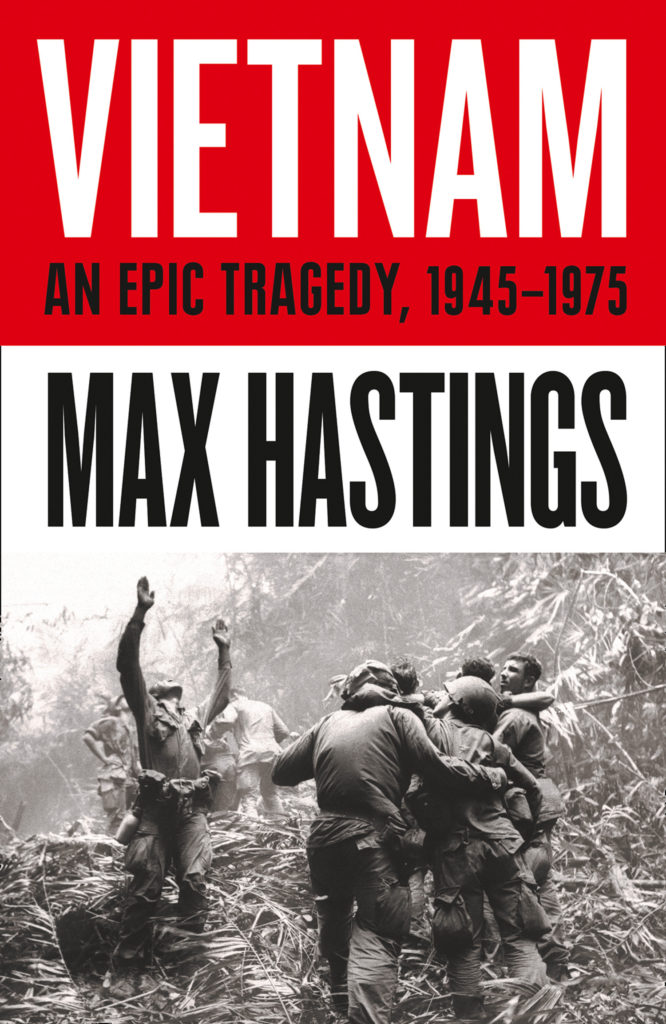 VIETNAM: An Epic Tragedy 1945-1975 represents the most ambitious retelling of the Vietnam tragedy for a generation.  It explores a huge range of sources to describe from both sides, and from the top decision-makers to the humblest fighters in ‘the boonies’ the epic conflict in which between two and three million people, 58,000 of them Americans, perished between 1945 and 1975.

Max Hastings has assembled testimony from scores of participants — communist and anti-communist Vietnamese, Chinese railway engineers, Soviet missile crews, American soldiers, Marines, advisers, medics — who recount personal experiences that extend far beyond the battlefields.  A major contributor to his narrative was the brilliant US foreign service officer Doug Ramsey, who spent seven years between 1966 and 1973 as a jungle prisoner of the Vietcong, often in a bamboo cage shorter than himself, who gave the author his unpublished memoir of his experiences.   Among others in a huge cast of other characters and witnesses are US Army advisers such as Col.Sid Berry, Huey pilot Dan Hickman, North Vietnamese soldier and writer Bao Ninh, South Vietnamese movie star Kieu Chinh and Vietcong doctor Dang Thuy Tram.   Gen.Walt Boomer USMC, one of the veterans whom Hastings interviewed, wrote to him after reviewing his manuscript: ‘I believe the book will become the “bible” for anyone who wants to try to understand the war’.

Hastings believes that American opponents of the war made a just calculation, that the Vietnam intervention was doomed.   Some went much further and argued that because Saigon’s cause was a bad one, that of Hanoi must be a good one.  Yet the author writes: ‘beyond peradventure the communists proved more effective warriors than the soldiers of Saigon, but it seems prudent to hesitate before anointing them the good guys in this saga’.

Amid the undoubted war crimes committed by America and its allies in Indochina, Hastings says that those of the communists have received too little attention.  South Vietnam was run by an ugly junta of generals, but the North was a totalitarian state, whose citizens enjoyed much less personal liberty than those ruled from Saigon. ‘In both North and South, wherever the communists’ writ ran they propagated terror and confiscated personal freedom’.  He characterises the struggle as ‘a contest that neither side deserved to win’.

Among key passages in Hastings’s book

Many of Hastings’s past titles, including All Hell Let Loose, Finest Years and Catastrophe 1914, have become best-sellers and been translated around the world, acclaimed for their marriage of big-picture exposition, and riflemens’ views of battlefields. This book likewise embraces the entire sweep of the Vietnam saga, from the White House to the cockpits of B-52s bombing the North; from firebases in the Central Highlands to communist camps deep in the triple-canopy jungle, the presidential palace in Saigon and the air-raid shelters of Hanoi.

Although he does not describe his own experiences as a young correspondent in the book, Max Hastings nonetheless brings to his narrative vivid memories both of the US amid war turbulence — he reported America’s traumatic 1967-68 dramas, and met President Lyndon Johnson at the White House — then later of Vietnam’s battlefields, reporting for BBC TV and British newspapers.   He quit Saigon by helicopter from the US Embassy in the April 1975 final evacuation.

VIETNAM: AN EPIC TRAGEDY 1945-75 is his 25th title, and ‘the one that has perhaps struck the deepest chord in my own experience and emotions.  Though I am not an American, that war was etched into my life and memories, part of a generational trauma’.   The book may frustrate some ‘true believers’ on both the political right and left, he says, because it chronicles the successes and failures of both sides.  It is a provocative, challenging work that attempts to portray and explain the most divisive conflict since World War II through the eyes of those who lived and fought it.  Hastings says: ‘I simply hope that those who read my book will put it down feeling that they have learned many things about Vietnam that they did not know when they started.   Writing it has done that for me — and I was there’.

MAX HASTINGS chronicles VIETNAM with the benefit of vivid personal memories: first of reporting in 1967–68 from the United States, where he encountered many of the war’s decision-makers including President Lyndon Johnson, then of successive assignments in Indochina for newspapers and BBC TV: he rode a helicopter out of the US Saigon embassy compound during the 1975 final evacuation. He is the author of twenty-six books, most about conflict, and between 1986 and 2002 served as editor-in-chief of the Daily Telegraph, then editor of the Evening Standard. He has won many prizes both for journalism and his books, of which the most recent are All Hell Let Loose, Catastrophe and The Secret War, best-sellers translated around the world. He has two grown-up children, Charlotte and Harry, and lives with his wife Penny in West Berkshire, where they garden enthusiastically.