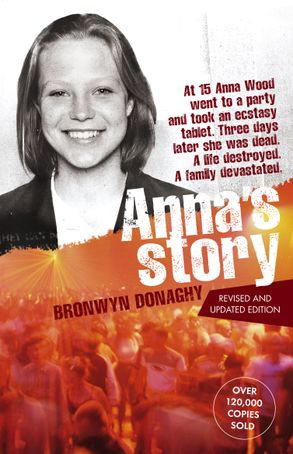 At 15 Anna Wood went to a party and took an ecstasy tablet. Three days later she was dead. A life destroyed. A family devastated.

She was just fifteen. She was leaving school to start the job of her dreams. She was beautiful, she had a loving family and countless friends. Yet on 21 October 1995, Anna Wood took an ecstasy tablet at a dance party and died three days later. A life destroyed, a family devastated, a community in shock. Bronwyn Donaghy interviewed friends, family members and numerous professionals in order to write the story of the circumstances surrounding Anna's death and of her family's decision to try and turn tragedy into a positive force for good. It is a story of our times, a story with powerful resonances for Anna's generation and their parents, for counsellors, doctors and teachers, for anyone who values the sanctity of life. 'As a teenager I have taken all kinds of drugs, not really knowing what they were and why I did it. then I found this book. I vowed never to take drugs again but it's just a shame it took the life of a beautiful, talented girl to make me realise how dangerous it was.' BC, aged 17, New South Wales 'I have never tried illicit drugs and although I was curious to do so ... the information provided in this book has scared me away from that forever.' LO, aged 16, Western Australia 'I've had Mum and Dad give me lectures about not taking drugs and stuff but it didn't really affect me until I read Anna's Story and realised what they do to ordinary people just like me.' AE, aged 15, Queensland

Bronwyn Donaghy is the author of the best-selling Anna’s Story, which explored adolescent drug abuse, and has sold over 30,000 copies. For two decades Bronwyn has specialised in writing about issues that affect families, and her articles and columns have appeared in the Sydney Morning Herald, Australia’s Parents magazine, New Woman and many other publications. Her parental survival guide Keeping Mum was published in 1997.

Other Works by Bronwyn Donaghy