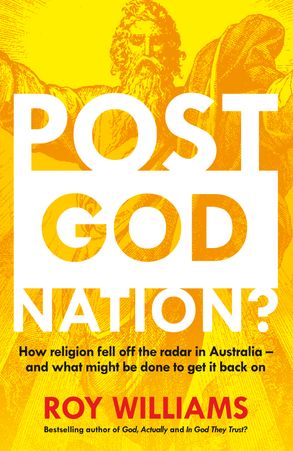 Post-God Nation: How Religion Fell Off The Radar in Australia - and WhatMight be Done To Get It Back On

At the time of Federation 98% of Australians identified themselves as Christians. Now only 8% say they regularly go to Church. What's changed? How did Australia become a post-Christian nation and what part did the Churches play in their own decline?

Author Roy Williams (God, Actually, In God they trust?) has long been an impassioned defender of Christianity. Here, he tackles the decline of the church head on, acknowledging that in many cases, inflexibility, negativity and a refusal to listen have led to a tarnished image. But he also argues that Australia had a long and often misunderstood Christian heritage. And without it, he says, we will become a society with no moral centre, a community where rampant materialism is the only rule.

Offering a bold roadmap for the Church to change, Williams challenges atheists, agnostics and true believers to a genuinely open debate about the force of faith.

One of Australia's emerging public intellectuals and writers, Roy Williams' distinguished 20-year career in the legal profession was cut short in 2004 when he experienced a life-changing illness. Forced to leave the law, he took time to recuperate before deciding to become a writer. His book reviews appear regularly in The Australian and The Sydney Morning Herald. He also contributes to Australian Literary Review, Dissent and Inside Sport. More information can be found at www.godactually.com

Other Works by Roy Williams

Post-God Nation: How Religion Fell Off The Radar in Australia - and WhatMight be Done To Get It Back On by Roy Williams