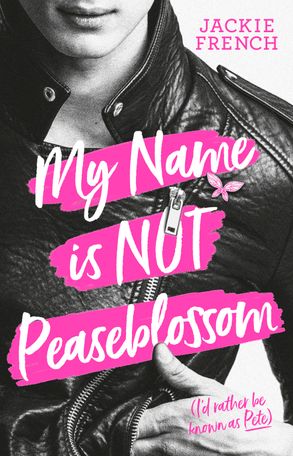 My Name is Not Peaseblossom

'A wonderful read for anyone whether they are discovering A Midsummer Night's Dream for the first time or revisiting the classic tale.'
- Books+Publishing, four stars

Titania rose to her feet. 'What is going on here, Peaseblossom?' she demanded.

I bowed to her. 'I apologise, Your Majesty. But I'd rather be known as Pete.'

At court, he's known as Peaseblossom, a servant to the Fairy Queen.

But as Pete, he prefers pizza to sugarplums and denim to daffodils. He wants to choose his own life too. But how can he when a fairy's sole duty is to obey the all-powerful Queen Titania?

This is Shakespeare's popular and delightful comedy A Midsummer Night's Dream with an added army of Amazons, a sea serpent and a selkie called Gaela, who luckily for Pete makes the best pizza in the world.

It is also a story of the intrigues of the Fairy Court, of vampire plots to dominate the world and of impossible loves that might just come true. Not by enchantment, but when two hearts thread together, making a magic of their own.

'By melding the old and the new, French cleverly raises questions about free will and the abuse of power ... A wonderful read for anyone whether they are discovering A Midsummer's Night Dream for the first time or revisiting the classic tale.' - Books+Publishing, four stars

'The tenderness and beauty French injects into the text is mesmerising ... Evocative scenes, tangible smells and sounds combine to immerse the reader in a carefully designed plot that both stays true to the classic play, and also uncomplicates things for the younger reader' - Kids' Book Review on I am Juliet

My Name is Not Peaseblossom by Jackie French