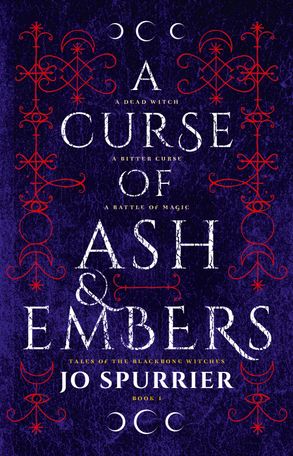 A Curse of Ash and Embers

A dead witch. A bitter curse. A battle of magic.

Some people knit socks by the fire at night. Gyssha Blackbone made monsters.

But the old witch is dead now, and somehow it's Elodie's job to clean up the mess.

When she was hired at Black Oak Cottage, Elodie had no idea she'd find herself working for a witch; and her acid-tongued new mistress, Aleida, was not expecting a housemaid to turn up on her doorstep.

Gyssha's final curse left Aleida practically dead on her feet, and now, with huge monsters roaming the woods, a demonic tree lurking in the orchard and an angry warlock demanding repayment of a debt, Aleida needs Elodie's help, whether she likes it or not.

And no matter what the old witch throws at her, to Elodie it's still better than going back home.

Praise for Winter Be My Shield:

'Unlikely heroes, villains you will cheer for, and cold that eats your bones. "Winter Be My Shield" will take you to an unforgiving place, but you won't want to leave it.' Robin Hobb

Jo Spurrier was born in 1980 and has a Bachelor of Science, but turned to writing because people tend to get upset when scientists make things up. Her interests include knitting, spinning, cooking and research. She lives in Adelaide and spends a lot of time daydreaming about snow.

Other Works by Jo Spurrier

Daughter of Lies and Ruin

A Curse of Ash and Embers by Jo Spurrier