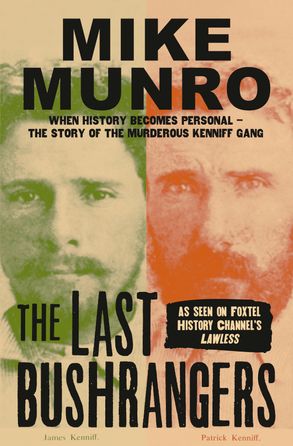 The story of Australia's last bushranging gang - the murderous Kenniffs.

Easter Sunday, 1902, deep in the Carnarvon Ranges a police constable and station manager are slain then later incinerated, their remains stuffed into saddlebags. Accused of the ghoulish crime are two members of the bushranging Kenniff gang, fast gaining notoriety as Queensland's equivalent of the Kelly gang. Yet the murders are a bold escalation from the petty fraud, horse stealing and cattle duffing the gang is known for.

Starving and exhausted after three long months on the run, the brothers are finally captured, and so the wheels of justice start to turn.

The story of the Kenniffs has fascinated Mike Munro for decades - ever since he found out these last bushrangers were his family. If not for Mike's grandfather illegally changing his name in shame from Kenniff to Munro, this major figure in Australian television would be known to us as Mike Kenniff.

But who were Mike's relatives? What drove them to their life of crime? And were the brothers really responsible for such terrible murders?

In answering these questions Mike Munro takes us back to the dawn of Federation, when bush skills and horsemanship could help outlaws escape the police, when remote pastoralists were vulnerable targets for thieves and marauders, when race and class divides were entrenched - but resented - and when brutal, feckless outlaws faced the ultimate punishment.

This is a story that is both gripping and personal, and an insight into an Australia just coming of age.

PRAISE FOR THE LAST BUSHRANGERS

'All families have a secret ... but Mike's is a doozy! This touching, TRUE story is a terrific read!' Di Morrissey

Mike Munro started his career as a 17-year-old copy boy on the Daily Mirror, then in television news. He went on to become a household name for his crusading and investigative journalism, with stints as a reporter on Willesee and 60 Minutes, before becoming host of A Current Affair and Sunday Night. For thirteen years he presented the much-loved show This Is Your Life, paying tribute to over 200 Australians. In recent years he has been working on documentaries, hosting the four-part series Lawless – the Real Bushrangers and Mateship – a Century of the Australian–US Alliance for Foxtel's History Channel. In 2014 Munro was made a member of the Order of Australia for his charity work and contribution to journalism.

The Last Bushrangers by Mike Munro