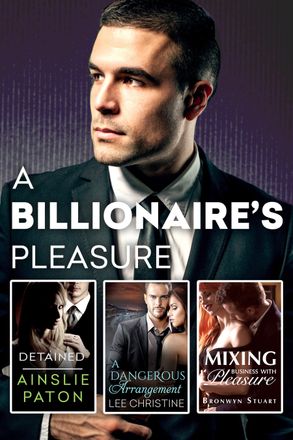 From one of Australia's hottest new authors comes a story about an international scandal, a billionaire, and a fearless reporter who might just save the day...

Confined in a cold, dull room in the depths of a Shanghai airport, a journalist chasing a career break and a businessman with a shadowy past play a game of truth or dare – deliberately not exchanging names. They tell each other their most painful secrets and burning desires. One dare leads to a kiss and a wild night of illicit passion, setting off a dangerous sequence of events, bringing exposure and disgrace. Only the brutal truth can save them. But it will also rip them apart. And it will take more than daring before they can build a new truth together.

Kicking off a brand new romantic suspense series from Lee Christine is A Dangerous Arrangement: a violinist with a secret, a billionaire with a problem and a race against time set on the beautiful Amalfi Coast.

When violinist Marina Wentworth arrives in Venice en route to a cruise ship for a short working holiday, the last thing she expects is to be confronted by a handsome stranger demanding answers. After going to great lengths to keep her real reasons for the trip a secret, Marina refuses to let her immediate attraction to Dean Logan derail her plans. Desperate to recover his latest superyacht designs, Dean doesn't want to believe the lovely violinist is involved in the devastating cyber–attack that threatens to destroy his yacht–building empire. However his growing feelings for Marina fail to extinguish the nagging suspicion that she is hiding something. Set against the backdrop of Italy's Amalfi Coast, Dean and Marina must navigate the dangerous waters of secrecy, attraction and the fusion of two very different worlds. Will their lives remain discordant, or will they take the chance at true harmony?

What's a girl to do when she finds herself naked except for her stilettos and backed up against a cold mirror, stuck between a rock and a very hard man?

Alison Marcum loves her baby brother and would do anything for him–until the day his loan sharks arrive on her doorstep and demand she pay them ten thousand dollars or else. With no way to repay the money, and not wanting to find out what they're capable of, Alison transforms herself from boring social worker to smoking hot model–but getting work isn't going to be the hard part for a woman who'd promised herself she'd never step in front of a camera again. Sam Mason is overseeing a jewellery advertising campaign, and after spending ten minutes in the boardroom with a nearly naked Alison, he decides he might actually enjoy the job. Strictly business, though. Sam's been burned by a model before and no matter how attracted he is, there's no way he's getting involved. As the lies begin to unravel and the loan sharks get impatient, will they both risk it all to be together or lose it all in a bid not to repeat the past?

Bronwyn's love of reading all things romantic got her into trouble at a very young age. Starting with Mills and Boon 'borrowed' from her mother and then progressing to meaty historicals. It's only fair that romance pays her back with unique ideas for her own novels.She now writes dark and gritty Regency from her treehouse in the Adelaide Hills surrounded by the laughter of her young children and the love of a great man.

Other Works by Bronwyn Stuart

Lee Christine is a former legal practice manager and corporate trainer. An amateur songwriter in her teens, she is passionate about music, and plays the alto saxophone. In 2011, In Safe Hands won first place in the Romance Writers of America Silicon Valley Gotcha Contest, followed in 2012 with first place in The Smoky Mountains Laurie Award and the East Texas Southern Heat Writing Contest. The novel also received a Commended in the 2012 Romance Writers of New Zealand Clendon Award. In Safe Hands is Lee's first novel, and she is currently writing her second, another gripping romantic suspense. She has two grown children, and lives in Newcastle, Australia.

Other Works by Lee Christine

Heart Of The Town

Ainslie Paton always wanted to write stories to make people smile, but the need to eat, accumulate books, and have bedclthes to read under was ever present. She sold out, and worked as a flack, a suit, and a creative, ghosting for business leaders, rebel rousers, and politicians, and making words happen for companies, governments, causes, conditions, high-profile CEOs, low-profile celebs, and the occasional misguided royal. She still does that. She also writes for love.

Other Works by Ainslie Paton

Tinsel in a Tangle

Between Boardroom And Bedroom