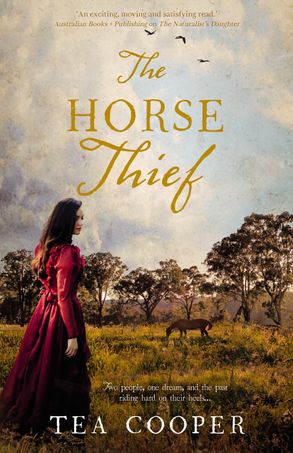 Two people, one dream…with the past riding hard on their heels. Now in B format, Tea Cooper's debut novel is a historical saga set in 1860's in Hunter Valley, where Téa is based, with a fascinating backstory to the first Melbourne Cup.

Can she save her family's horse stud and reputation?

When India Kilhampton is caught up in the heart–stopping excitement of the first Melbourne Cup, her mind is made up. She will breed a horse to win the coveted trophy and reunite her fractured family. Determined to make her dream a reality she advertises for a horse breeder.

Jim Mawgan arrives at Helligen Stud in the Hunter Valley to take up the position but he also has a mission: he must fulfil his father's dying wish to right past wrongs and prove his ownership of the prized stallion Jefferson.

Jim and India discover they share a common goal but as the secrets of the past unravel old enmities surface. Will India save Jim before he is branded a horse thief and sentenced to death or will an old betrayal stay her hand?

Tea Cooper is an established Australian author of contemporary and historical fiction. In a past life she was a teacher, a journalist and a farmer. These days she haunts museums and indulges her passion for storytelling. She is the bestselling author of several novels, including The Horse Thief, The Cedar Cutter, The Currency Lass, The Naturalist's Daughter and The Woman in the Green Dress.To find out more, visit Tea on her website. You can also follow Tea on Facebook, Instagram, and Twitter.

Other Works by Tea Cooper

The House on Boundary Street

The Girl In The Painting

The Woman in the Green Dress

The Horse Thief by Tea Cooper