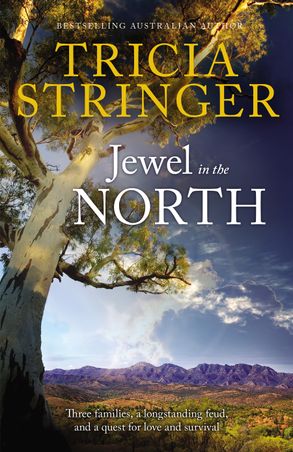 Jewel In The North

From bestselling author Tricia Stringer, comes this compelling stand-alone historical saga, which can also be read as the final book in the Flinders Ranges series. (Heart of the Country 2014, Dust on the Horizon 2015) A longstanding feud of land and love, a family torn apart and a quest for the ultimate prize…

A breathtaking historical family saga of love, death and forgiveness and a quest for the Jewel in the North

1895 The Flinders Ranges are a beautiful but harsh landscape as Joseph Baker, a pastoralist in that unforgiving environment, knows all too well. For three generations his family have farmed the land, married and had children at their property at Wildu Creek, but now, struggling with hostility from the local community for his choice of wife, Joseph finds himself fighting to save not just his friends and family but his very existence.

His son William has his own battles to fight: not only the drought that takes over the land but his own despair, as he faces rejection from the woman he loves. Meanwhile, a ruthless enemy will stop at nothing to take from William what he considers to be his. Could the vicious and cunning Charles Wiltshire be his nemesis? Or does another man, in a quest for the Jewel of the North, hold the key to his destruction?

As the First World War looms on the horizon, two men struggle to survive both the elements and each other on a quest to find that they hold dear – but only one will have the courage to stand strong.

The deeply satisfying conclusion to the bestselling Flinders Ranges series.

Tricia Stringer is a bestselling and multiple award-winning author. Her books include The Model Wife, Table for Eight, and the rural romances Queen of the Road, Right as Rain, Riverboat Point, Between the Vines, A Chance of Stormy Weather, Come Rain or Shine and Something in the Wine. She has also published a historical saga; Heart of the Country, Dust on the Horizon and Jewel in the North are set in the unforgiving landscape of nineteenth-century Flinders Ranges. Tricia grew up on a farm in country South Australia and has spent most of her life in rural communities, as owner of a post office and bookshop, as a teacher and librarian, and now as a full-time writer. She lives in the beautiful Copper Coast region with her husband Daryl, travelling and exploring Australia's diverse communities and landscapes, and sharing her passion for the country and its people through her authentic stories and their vivid characters.For further information go to triciastringer.com or connect with Tricia on Facebook or Twitter @tricia_stringer

Other Works by Tricia Stringer

Jewel In The North by Tricia Stringer