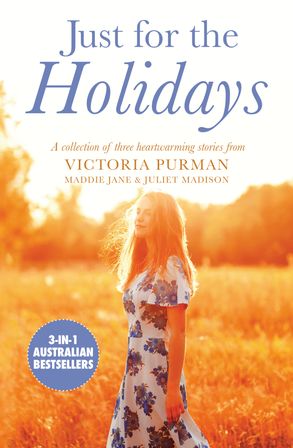 A collection of heartwarming stories from three bestselling local authors.

Only We Know by Victoria Purman

When Calla Maloney arrives to Kangaroo Island, she's not on a holiday but a mission: to track down her estranged brother.

Sam Hunter is the reluctant prodigal son when his father's illness forces him home. The last thing he needs is playing tour guide to a redhead with no sense of direction.

As Sam and Calla dig deeper into their long-buried family secrets, they discover that no one is an island and that opening up their hearts to love again might be the most dangerous thing they will ever do...

Backpack and a Red Dress by Maddie Jane

Managing a flailing second-hand clothes shop is not part of Cally Kirkwood's life plan. But she's travelled across the world to meet her birth father and she won't leave until he acknowledges her. Soon Cally finds herself invested in turning the store around, despite the opposition of her new employer's son, Sam Hunter.

But an unexpected discovery means Cally must decide where her true loyalty lies...She thought she'd do anything to find love; but choosing between her past and her future may leave her with no love at all.

February or Forever by Juliet Madison

Chrissie Burns has a plan: renovate her late aunt's rundown beach house, sell it, and move on. But Tarrin's Bay has a lot to offer. Now, Chrissie is shocked to discover she will be the private yoga instructor to Drew Williams, Australia's top singer/songwriter.

Drew's down-to-earth nature draws happiness out of Chrissie and though her days of stretching may bring Chrissie peace, she knows that this interlude must end. Because there's no pose to aid her if Drew leaves her heartbroken.

Maddie Jane lives near the beach in Christchurch, New Zealand, with her husband, three children and a very hairy dog. She has a journalism qualification as well as a degree in history and English literature from Canterbury University. She started reading romance novels when she was far too young and hasn't stopped. When she isn't reading or writing she likes walking on the beach and planning her characters' happy ever afters. She enjoys holidays, movies with happy endings and spending time with her family and friends.

Other Works by Maddie Jane

Backpack And A Red Dress

Juliet Madison is a naturopath-turned-author with a background in dance, art, internet marketing and perfume sales (yes, she was one of those annoying people in department stores who spray you with perfume). Nowadays she prefers to indulge her propensity for multiple careers by living vicariously through her characters. She likes to put these characters into extraordinary situations and take them on a challenging journey to discover their true passion and inner strength, weaving in some laughs, tears, romance and sometimes a touch of magic along the way. Living near the beach on the beautiful south coast of New South Wales, Australia, Juliet spends her days homeschooling her son and running her internet business and her nights writing fiction while doing her best to avoid housework.

Other Works by Juliet Madison

Victoria Purman is an Australian top ten and USA Today bestselling fiction author. Her most recent bestseller, The Land Girls, was published in April 2019. The Last of the Bonegilla Girls, a novel based on her mother's post-war migration to Australia, was published in 2018. Her previous novel The Three Miss Allens became a USA Today bestseller in April 2019. She is a regular guest at writers festivals, a mentor and workshop presenter and was a judge in the fiction category for the 2018 Adelaide Festival Awards for Literature. To find out more, visit Victoria on her website.  You can also follow her on Facebook, Instagram and Twitter.

Other Works by Victoria Purman